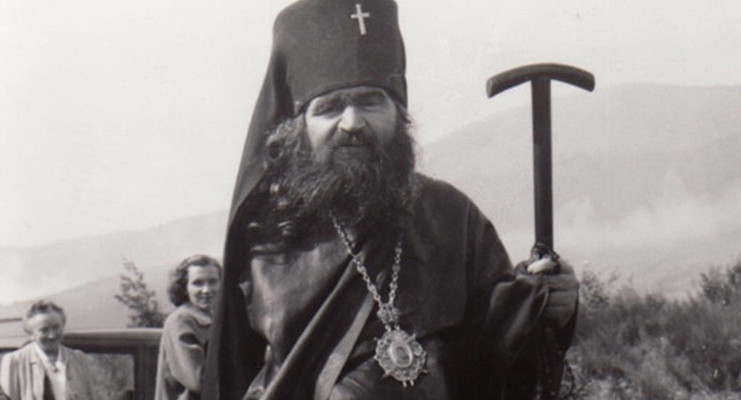 "Holiness is not just righteousness, but achievement of such spiritual heights so that the grace of God, that fills the saint, out-pours from him on those who communicate with him"

Saint John of Shanghai and San-Francisco is a saint of the 20th century, spiritual leader of Russian diaspora and example of strength of spirit, meekness, nobility, and hard work.

Saint John, whose secular name was Mikhail Borisovich Maximovich, was born on June 4th 1896 in a village of Adamovka of Kharkov governorate to a noble family. Young Mikhail was very pious from early years. For example, at 13, when he was a cadet at the Poltava military school, during the march dedicated to the bicentennial of battle of Poltava, turned toward the cathedral and made sign of the cross. For that he was punished strictly and derided by his follow cadets. However because of intervention of Great Prince Konstantin Konstantinovich the punishment was changed to a letter of praise. Seeing spiritual dedication of this young man, his French governess converted to Orthodoxy.

Mikhail completed studies in law at the university of Kharkov, however was demonstrating strong interest toward service for the Church.

During the revolutions of 1917, the Maximovich family remained loyal to the czar. Young Mikhail took part in defending sanctuaries from brutalization. He was arrested by Bolsheviks for protesting against removal of bells from the Church of the Epiphany.

In 1920 the parents of Mikhail convinced him to leave Russia. Young lawyer moved to Serbia, where he enrolled in the theological department of the Belgrade university. After 2 years, in Miljkov monastery he was tonsured under the name John, in honor of his great uncle, John Maximovich of Tobolsk, the Enlightner of Siberia and China. Young monk John became known quickly in Serbia. In 1934 metropolitan Anthony Hrapovitzky ordained him to the episcopal office and sent him to Shanghai to offer spiritual leadership to Russian refugees.

In Shanghai, master John contributed to unification of the Russian diaspora. Under his leadership a temple of Theotocos was built with a parish house, an orphanage. The first and only monument to a European in China -- to Alexander Pushkin, was erected in Shanghai at that time as well. Bishop John was amazing everyone with how otherworldly he was, despite being so active in everyday affairs. According to eyewitness accounts, he was up at night, suddenly was appearing at the door of those who were in need. He daily visited the sick with the Holy gifts, always on foot. The Shanghai period in his ministry was known with great number of healings and miracles through his prayers.

During Japanese occupation, Russians showed resistance, and many leaders of Russian Emigre Committee were killed. Bishop John showed bravery and declared himself the head of the Russian diaspora.

In 1949 "Russian Shanghaiers", fearing the communist takeover, decided to leave China for the Philippines. Bishop headed there to organize the Russian community. Shortly in the jungles a tent city grew with a population of 5 thousand people with 3 churches and civilian administration. All that, was done with prayer. When Russians were asking the locals about danger of typhoons, there were answering that there was nothing to fear, for "your holy man every night goes around your camp and makes a sign of the cross at all four sides".

To ease the life of the unfortunate refugees, it was advised to the bishop to turn to Washington, which he did. Through his efforts, for the first time, the American government changed laws to accommodate Russian refugees and all 5 thousand were transferred to San Francisco and granted citizenship.

In 1951 as an archbishop John moved to Europe, where headed the Paris cathedra. He settled in Russian cadet corps in Versailles. He began organizing upbringing of Russian children. He also reestablished honoring of the ancient Orthodox saints of the West. Serving in French, English, Greek, and other languages, he ardently prayed for everyone regardless of their region, bishop John found great respect and renown in Europe. His greatest accomplishment was the founding of Dutch Orthodox Church that since then acquired her own bishop, built monasteries and publishing houses.

In the 1960s, the Russian community in America requested the Synod of the Russian Church abroad (in New York) with to invited archbishop John to California, which was done. St. John, as once in the Far East, started his ministry in the Far West by founding the temple to the Theotocos. He experienced many trials during that undertaking. Russians were in disagreement about the construction and there were false accusations against the archbishop. They all were dismissed by the court and the church was completed.

In America, Saint John blessed his spiritual children -- Seraphim Rose and Herman Podmoshensky to start a publishing company and to distribute Orthodox literature in America. He started the fraternity of St. Herman of Alaska as well as monastery in Northern California.

Vladyka felt his near death and left for Seattle, where there was a church of St. Nicholas, founded in honor of the last Emperor Nicholas II. After serving the Divine Liturgy, archbishop John was bidding farewell in the altar with his earthly service. After that he went up to his cell and reposed sitting in a chair in front of the icon of Mother of God of Kursk-Root.

In 1994 on June 19/July 2, Russian Orthodox Church Abroad glorified archbishop John Maximovich among the saints. In 2008 after the reunification of the Church Abroad with the Church of Moscow, vladyka John was glorified in the whole Russian church.